The field is situated about 250 km Southwest of Tripoli and about 300 km North East of the Wafa Field. The fast track schedule approach has a goal to have first oil by early 1st Quarter 2009.

The field development will be executed in 2 phases:

For the phase 1 the production will be through two oil production wells. At this time also 1 gas injection well will be drilled and completed, through which the associated gas will be stored in the reservoir, together with 1 water disposal well.
For the implementation of phase 2 (WAG) two additional injection wells will be drilled and completed, together with 3 water supply wells.
The Production Facilities for phase 1 will include flowlines & gathering system, two stage separation, oil desalting, stabilization, storage and pumping, gas dehydration and compression, waste water treatment and disposal, fire-fighting and ESD systems. A water injection system will be added for phase 2.
The development concept foresees the construction, installation and operation of a modular treatment plant on a rental basis (EPF, Early Production Facility) with the option to buy it after 2 years of operation.
Oil production will flow through a 55 km long 10” pipeline that from the field will connect with the Wafa-Mellitah pipelines North of Sinawen at Line Valve Station No. 8. The same pipeline will be utilized later for the gas export when the oil reservoir exploitation will come to an end and the gas exploitation will commence. All the required provisions for the tie-ins have been already made on the Wafa-Mellitah pipelines; therefore connection of the oil pipeline to the existing pipelines should be easy and straightforward.
The production profile foresees a maximum plant capacity of 10,000 BPD with a design life of 20 years.

In the development plan of WLGP a decrease in the reservoir pressure was foreseen after 4 years of production. Updated reservoir study concluded that the need for compressors is expected to be after 5-6 years of production (i.e. by the end of 2009). Reservoir has completed and delivered the data (i.e. production profiles, pressure profiles etc.) needed to start the Engineering activities.

Electrical power supply for the temporary and army camps

In Wafa Field, Company retained the Contractor temporary camp and facilities. These facilities were fed by electrical diesel generators.
In order to avoid supporting additional costs for fuel and maintenance Operation dept requested to lay down an electrical cable from the Plant power generation. The scope of work has now to include both Temporary and Army camps.

Three infilling wells (A34H, A38, A45H) and 1 Appraisal (A46) are envisaged to be drilled and completed starting from September 2007. Each well needs to be connected to the relevant Satellite area with flow-lines and all associated equipments (Electrical, Instrumentation, chemical injection package etc.).

Initially only the well A32 needed to be assisted by an electrical pump (ESP). Further analyses from Reservoir indicated the need of ESPs for up to 7 oil wells (A04H, A22H, A26H, A32H, A34H, A36H, A45H). This will require 2 power cables to be installed, one going from the Central Plant to the oil satellite 1 (N01) and another to the oil satellite 2 (N02). The 2 wells foreseen having ESPs installed in 2008 (A36H and A32H) are temporarily fed by diesel generators until the power cables are installed.

In order to asses the max potentiality of the Plant in line with the gas Pipeline transportation maximum capacity to achieve higher production rates, it was necessary to carry out a study to identify the potential bottleneck and optimize the Operation parameters.
The study was completed and final report received. According to the study the modifications required to increase 10% the design capacity (stage 1) are minor. Therefore it was recommended by Company Management to execute the implementation of the study stage 1 results.

In order to reduce the environmental impact it is was decided to provide a smokeless flare (Steam blowing) in addition to the one already existing for the LPG facilities.

During simultaneous purging of equipment in Mellitah Plant it happens that the demand of nitrogen is increased resulting in the operation delay and consequently production loss. An additional tank and related facilities are foreseen to mitigate the additional demand.

The existing waste water treatment plant cannot any longer cope with the increased personnel number at site. For this reason provisions have been identified to increase the numbers of treatment units. 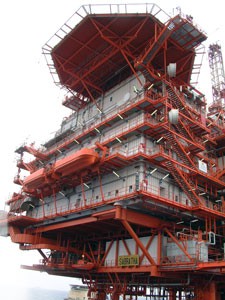 Pre-feasibility studies on the Full Enhancement of Sabratha Platform and Mellitah Complex have been carried out;
The results, based on the original WLGP design, show that a minimum 10% increase target (+1 BSCMY @2009) is achievable without major interventions or modifications in the existing infrastructures;
Next Phase of the enhancement studies, is currently in progress during the Concept Selection phase and based on actual operating data, shall define the final production target.

to satisfy the 10 BSCMY gas sale as per current contractual obligation till 2028.
to optimize the utilization of the existing facilities and fully exploit Area NC41 reserves increasing gas production from 10 BSCMY to 13+ BSCMY till 2028.
to meet possible increase of local and international gas demand.
to develop the associated liquid hydrocarbons. 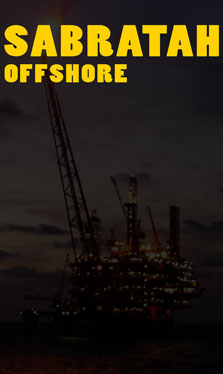